As webmaster, I usually try to stay right on top of all the info and reports coming in from the road while Simon is on tour. For the April 2014 US tour, I was neck deep in tour manager (and laundry) duties and unfortunately the “tour diary” suffered. Luckily the slack was taken up quite nicely by Simon on his blog. 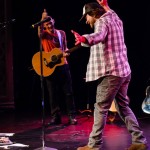 So here is the well over due brief tour summary and a look back through photos! Simon started out on this tour already having been on the “road” (well, water) with Roger Daltrey for the Moody Blues Cruise, followed by a corporate gig in TX. Obscenely early the next morning, he caught a flight to DC arriving in time for opening night at Wolf Trap. It was non-stop from there on out, heading up the east coast and then on to the Midwest, until finally being able to spend some relaxing days off in Seattle. The tour resumed with Eddie Vedder as Simon’s guest on stage at The Triple Door.

The mild chest infection Simon had been fighting off from nearly day one unfortunately got the best of him by sound check in Portland. That show had to be cancelled, something that he rarely, if ever, has done. But he was well enough next in San Francisco and the tour rolled on through California. 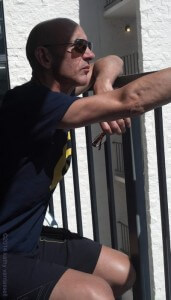 A small break with a couple of relaxing days in San Diego was a treat. As luck would have it, due to Simon’s quest for a room with proper internet, he was upgraded to a great one with a balcony overlooking the harbor. Beautiful weather, beautiful place, and a tranquil two days before the final relentless end run.

Five gigs  in five days to reach the end. Gig; drive – gig – drive; fly – gig; fly – gig; fly – gig; and finally fly home on day six. By the time Simon left Denver, his chest infection / flu had returned with a vengeance.  His final show in Minneapolis was amazing, considering he was so very ill. After spending all day trying to sleep it away and regain some strength, he arrived at the venue only minutes before he was due on stage, still unwell. Even though given the option to do otherwise, he went on and gave all he had and then some. Inspiring. The audience loved it. I was in awe of his sheer will and ability to pull that energy from some amazing inner place while teetering on the edge of collapse. By the following afternoon he had recovered just enough to be able to make the long flight back home.

While I’d previously substituted a number of times over the years, this tour was a bit of baptism by fire as far as tour managing goes. It was an honour and a privilege to watch Simon give %110 every night. Fantastic to observe audiences respond so enthusiastically to his energy, his songs, his lyrics, his banter and to witness their interaction with him as he stuck around afterwards to meet and sign cds for them. Lastly, it was a total joy to spend time with him as a friend and traveling companion. Looking forward to the next time.

Oh, and did I mention laundry? I sure hope he didn’t leave that Gretsch mixed in with the whites again …

I’ve put together some posts in the PHOTOS section – some taken by fans, some by pros and some by me –  trying to cover most of the dates. Check ’em out. If you’ve got some we haven’t seen, get in touch!