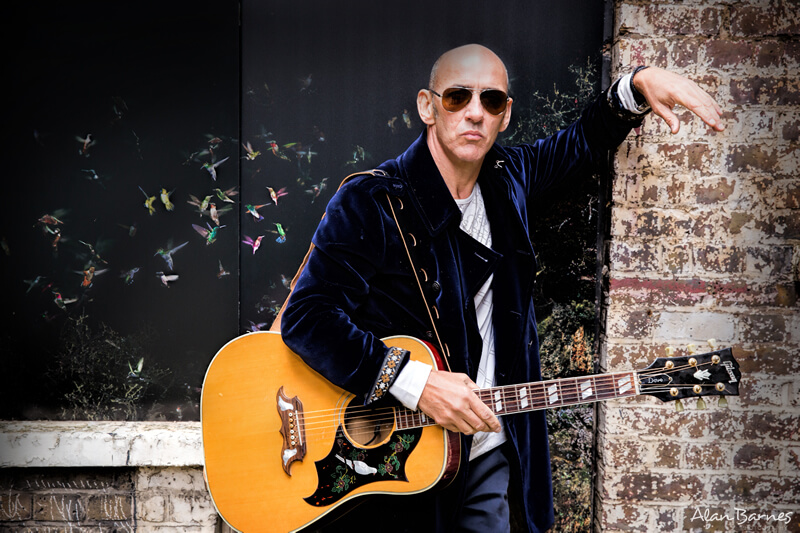 SIMON TOWNSHEND was born with music in his blood. The son of England’s top big-band reed man, Cliff Townshend, and younger brother of The Who legend Pete Townshend, Simon has been recording and performing since the age of nine, when he was recruited to add vocals to The Who classic Tommy.

Although the Townshend name is familiar, Simon’s music has its own original sound and his song writing plunders great depths and returns with unique compelling narratives set against haunting melodies. Simon has a strong loyal fan base which includes a number of fellow musicians such as Eddie Vedder (Pearl Jam), who has followed Simon since his 1983 release ‘I’m The Answer’.

Simon, a multi-instrumentalist and singer, has released 8 acclaimed solo albums and one with the band Casbah Club (featuring Bruce Foxton/The Jam & Mark Brzezicki/Big Country), all released on his own label STIR MUSIC. In 2016, as STIR RECORDS UK, he released remastered with bonus tracks versions of LOOKING OUT LOOKING IN and DENIAL. Both of these albums, well received upon original release, contain some of Simon’s most personal and inspirational work to date.

In addition to his own music, Simon has been guitarist and vocalist in The Who since 1996, playing sold out tours around the world, including monumental performances at the 2010 Super Bowl and the closing ceremonies of the 2012 London Olympics. Referred to by one U.S. newspaper as The Who’s “secret weapon”, Simon was an integral part of the band’s 2012/2013 “Quadrophenia and More” tour, the “Who Hits 50” dates (2014-17), and is currently with them on their “Movin’ On” tour (2019-2020).

December 2019, The Who released their first album in 19 years, called WHO. Simon’s composition, “Break The News”, sung beautifully by Roger Daltrey, was included on the album. Well received by fans and critics, and praised by Roger and Pete, it served as the 4th single from WHO.

In 2004 Simon produced The Who’s “Real Good Looking Boy / Old Red Wine” studio recordings and lent his talents to their 2006 album Endless Wire. Diving further back, his vocals can be found on the 1975 TOMMY Soundtrack (“Extra, Extra, Extra”). Simon has also performed with numerous other established acts ranging from Jeff Beck to Pearl Jam and Dave Grohl. He continues to work closely with Roger Daltrey and elder brother Pete on a variety of projects.

the Press has said …

“The strong, supple voice wrapped itself around emotion-filled lyrics, and was bolstered by a deft hand, especially on the 12-string guitar.” (Ottawa Citizen)

"Wonderfully crafted songs performed with the confidence and maturity that only comes from possessing considerable talent and exercising it in public for years and years. Brilliant opening set. “ (iePentincton)

"… a fresh, compact sound and style all of its own… there is a restless energy about these songs which is utterly compelling… a genuinely original talent. 5/5” (London Sunday Express)

"He plays the guitar (both six string and twelve string as well as mandolin) with furious abandon and fleet fingers; he pumps his fist and throws picks into the audience; he sings with the high, clear, powerful tone we associate with classic rock bands. Townshend sells all of this so convincingly, you can practically hear the band that isn't there." ( Rob Cline, Hoopla)