After Joe’s Pub in NYC, Simon flew out to San Francisco, where he would meet up with a slightly different incarnation of his band for a live video shoot at the amazing TRI Studios, and a live gig at The Boom Boom Room the following night.

By all accounts, the band were on fire at TRI – something special was happening and it is caught on tape for the rest of us to witness a bit later down the road!

I don’t know what to say! TRI show was amazing. I watched some footage back after and it blew me away. Those guys there know what they’re doing. The sound, lighting and visuals are just fantastic. My band of Tony Lowe, Scott Devours and Dave Beste rocked the house. Can’t wait for the first stream cast next week.

Then it was off for a (very!) late night gig at The Boom Boom Room.

Tho original plan was for Simon to come out and do a short acoustic set followed by the band set (as evidenced by the pre-show setlist photo snapped by Tim Herrlinger) – but while not going exactly to plan, the acoustic numbers DID get played, but instead at the start of the encore 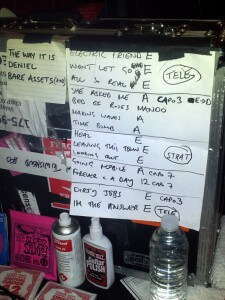 Off to a great start at midnight (thanx Tim)