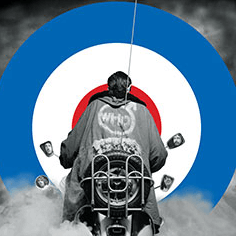 The tour, line-up and dates were officially announced on July 19th, and presales have already begun.
Get full details at www.thewho.com

THE WHO, one of rock’s legendary and defining bands, have announced a major North American arena tour where they’ll perform their iconic 1973 double album QUADROPHENIA in its entirety, along with a selection of WHO classics. The critically acclaimed QUADROPHENIA marked the British band’s second rock opera (after Tommy), raised the bar for rock albums as an art form and hit #2 on the U.S. Billboard album chart. Founding members ROGER DALTREY and PETE TOWNSHEND will be joined by Zak Starkey (drums), Pino Palladino (bass), Simon Townshend (guitar/backing vocals), Chris Stainton (keyboards), Loren Gold (keyboards/backing vocals) and Frank Simes (musical director, keyboards/backing vocals)

The US dates run from Nov 1st thru Dec 9th and Jan 28th thru Feb 26th.
LOOK FOR SIMON TO DO A NUMBER OF SOLO APPEARANCES inbetween the Who’s scheduled dates throughout the tour!
More details as they are finalized.