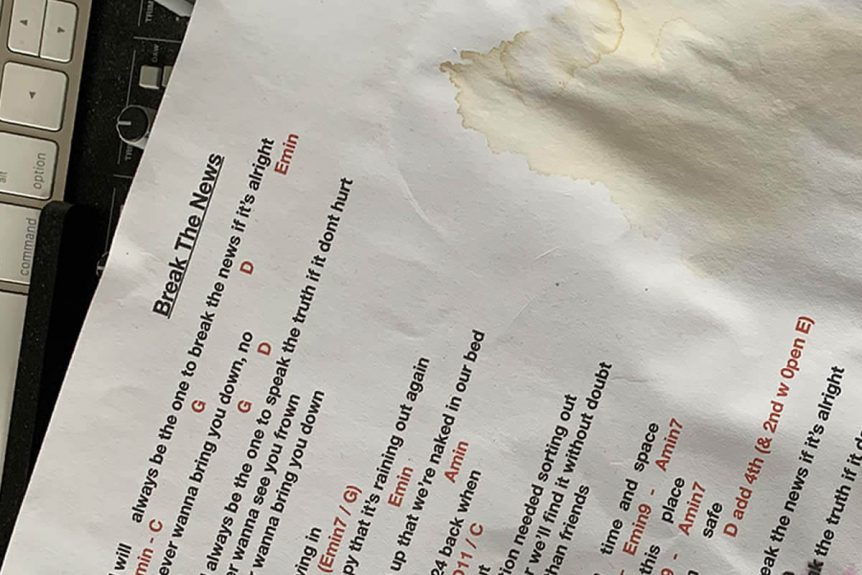 The new album WHO from The Who, their first in 13 years, features a song written by Simon Townshend called BREAK THE NEWS.

Simon on BREAK THE NEWS from Uncut – Sept 2019:
Simon Townshend, too, has written a song on the album. “That’s the closest I’ll ever get to being in the band,” he says proudly. “It’s called ‘Break The News’. I came up with the idea when I was going to see the doctor about something, and I wondered what it would be like if you had to come home and break really bad news to your partner. So this song is very upbeat and happy, but basically saying ‘I’ll always be the one to break the news / But only if it’s good news.’ If it’s bad, I’ll just keep quiet!”

Roger on Break The News:

“And there I’ve got a Simon Townshend song, which I’m glad to have done. Because Simon is a great musician and I’ve been with him since 1994 — a long, long time. And he writes great songs, Simon. But this one, it’s just something lighthearted on the album, but it’s got a lot of tenderness in it and I like it. That’s been nice doing that. I enjoyed doing that.”
Roger Daltrey – interview WMCE – Lecom Radio

…”Break the News,” written by Townshend’s younger brother Simon, who tours with both the Who and in Daltrey’s solo band. “I’m so fond of Simon; He’s like the brother I’ve never had, and it was great to be able to do one of his songs,” he says. “It’s very tender, and I think it’s good we can have all those qualities there at this age. We can have the anger and the venom that we had in our youth in certain songs, and we can do things like this that are really tender and show that we are human and have all those strengths and frailties and vulnerabilities.”
Roger Daltrey – Billboard

Pete on Break The News:

“Break The News. This is a wonderful thing. I’ve always wanted to celebrate the fact that my brother Simon is such a fantastic musician. My brother Simon and I worked on an album of his back in the 80’s called “Sweet Sound“. I produced it and I really thought he was going to break – he was going to have a hit. And everywhere he went people just asked him about me. And about The Who. And that became his life. So Roger many years ago decided to invite Simon into what was his solo band and since then [Simon’s] been playing with The Who. So I just thought it’s time for Simon to have a song on a Who album. And Simon wrote this great song – Break The News. Which is about his marriage I think, I can’t tell you too much, but it seems to me about an afternoon when, you know, two people in their middle-age suddenly find each other again on a sunny afternoon, making love like the old days, and how this is a big story. It’s such a great song. And it’s a really, peppy, happening song. I love it.”
Pete Townshend – Sirius XM – Deeper Tracks (Ch. 27)

Dave Sardy on Break The News:

…it’s a really cool track …Simon’s amazing. If you’ve seen them live, Simon’s fantastic on tour…just does a really yeoman’s job of just playing perfectly and on the spot in whatever [the] song needs and in whatever moment, and is a really great musician in his own right. I can’t imagine what it’s like to have your older brother as Pete Townshend and then also be a musician, and he’s an incredible musician too..I think it’s a great song and that’s why it got consideration and kudos to Pete for being open to it and recognizing the track.
Dave Sardy – Underground Garage – Coolest Conversations

So far many reviewers have taken notice (Listen yourself below!):

‘WHO’ either recaptures the band’s root ferocity or explores new territory with style:…
‘Break The News’, a folk rocker with a contemporary Mumford crunch.
Mark Beaumont – NME

Positivity hasn’t galvanised the strongest songs on Who, but kindness and friendship have. “Break the News”, is about trying to be a good person and a friend to those close to you. The raconteur, folk-acoustic guitar with piano and handclaps is the perfect soundtrack and the understated electronic synth keys towards the end ensure completeness and near perfection.
Michael Barron – XS Noise

.. while I’ll Be Back and Break the News are heart-on-sleeve paeans to companionship, the latter a semi-acoustic canter which wouldn’t be out of place on an Ed Sheeran album.
Fiona Shepherd – The Scotsman

…while the folky stomp of Break the News, written by Townshend’s brother Simon, hymns the pleasures of old age, among them “watching movies in our dressing gowns”, which frankly seems like straight-up trolling of the kind of person who feels obliged to bring up My Generation’s thoughts about the relative merits of dying and ageing, whenever the Who’s name is mentioned.
Alexis Petridis – The Guardian

“Break the News” … A heartwarming song with intricate, folky guitar work, and an especially catchy chorus, sung with conviction, it sounds … like the product of wisdom, in its cool composure, and implicit aura of gratitude, summed up in lyrics about “watching movies in our dressing gowns.” Yes, this is the same band that once declared, “I hope I die before I get old.”
Adi Mehta – Entertainment Voice

(via google translate from German)
Daltrey’s low-pitched voice: Against the ravishment of the powerful, know-it-alls or idiots are still going on, but the biggest enemy seems to be aging. He’ll always be the one to tell us the truth, according to Break the News, a happy, almost Ed-Sheeran-style pop number, but a few lines away, the weathered rebel sits snugly in the bathrobe on the sofa and watch old movies.
Andreas Borcholte – Speigel Online (German)

Written by Townshend’s brother, Simon, “Break the News” is a reflective, uplifting foot-stomper that almost feels like a single—if the band cared about such things at this point.
Tony Hicks – Riff Magazine

…Simon Townshend has been a source of lifeblood within The Who’s camp, adding his vocals and assertive guitar parts to help thicken their in-concert sound and bring the band back to a three-singer unit. … “Break the News,” a fabulous number that jumps deep into the Americana musical well. Pete Townshend and Roger Daltrey sound remarkably comfortable throughout Simon’s winning song.
Scott Smith – Times Record

… a combination that benefits Who, since he [Daltrey] handles vulnerable moments like “Break the News” with sensitivity
Stephen Thomas Erlewine – Allmusic.com

…and the mostly acoustic “Break The News” is another strong track.
Dave Maturo – Medium

The spirited folk of Break The News is also very good , from the pen of the aforementioned brother Simon.
Cico Castartelli – Cool Mag (Italy)