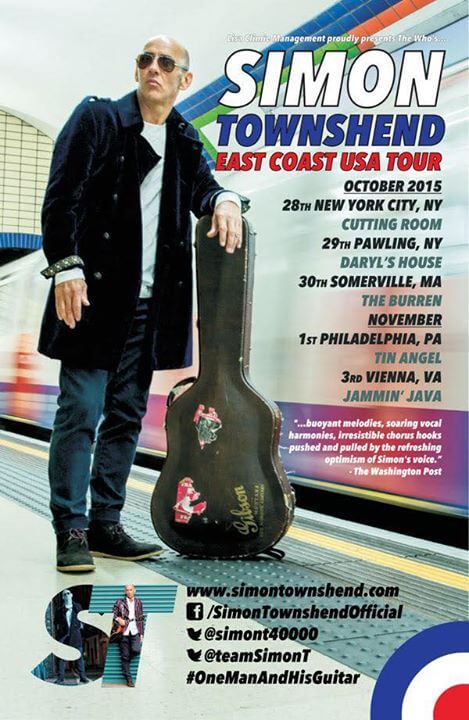 Well, I have 2 shows under my belt and now on the road to Somerville, MA for tonights show at The Burren. Really excited as the Boston area has always been good to me, mostly due to the good old House Of Blues, Cambridge days where I played many times and generally hung out on off nights while touring with Roger Daltrey, John Entwistle and Zak Starkey back in ’94 (Daltrey Sings Townshend tour). So much fun and happy memories.

The Cutting Room, NYC was a good opening night – fab venue and wonderful people. I tried out a lot of new things, songs never played before live and new instrumentation – mainly a Takamine nylon strung classical guitar that works really well on the ballads – in hindsight perhaps NYC is not the place to try these things out for the first time but I have no regrets, it was a great success and good experience. I’ll definitely be heading back to the Cutting Room later in the year for a charity show which I’m hosting (to be announced soon) in conjunction with my good friends at British Airways who have been sponsoring me and TeamST on this mini tour.

Last night at Daryl’s House, Pawling, NY was spectacular…. one of my best ever solo performances. I can safely say I blew the roof off. The crowd were amazing, the venue is top draw and my performance excelled. Somehow I felt the spirit of Daryl Hall in me. I could even hear his influences in my music which I’ve never been aware even existed, that is until my sound check when I had a magical moment. I’m so, so pleased that the whole show was professionally filmed on five cameras and recorded on 5.1 sound. This is one I’d love to share with my friends and fans so who knows, there may even be a DVD available soon…. Perfect Xmas presents for all the family 😉

Another exciting discovery is, Periscope (thanks to tour manager, Kathy VT).

This fantastic App opens up a whole new world of possibilities and dare I say it, instant gratification. Anyone online or with a mobile phone can download the app and watch segments of backstage footage, live bytes from soundcheck or even actual show footage. It allows live comments and ratings which I can respond to – obviously that will be difficult while I’m actually performing but I’ll be doing lots of clips from my upcoming acoustic album recording sessions where I’ll have the freedom to interact. I really like this app and will be abusing it so stay in touch by following me on Twitter and the alerts will come in when I’m active on Periscope. Also, check in on my blog from time to time – I enjoy doing these updates and have plenty more to say. Exciting times ahead.