So, the poster that was on the wall at The Triple Door, Seattle is now in Eddie Vedder’s kitchen 🙂 That’s funny! Ed has a genuine love of music and collects souvenirs wherever and whenever he can while working on a music project or attending a show as a fan. 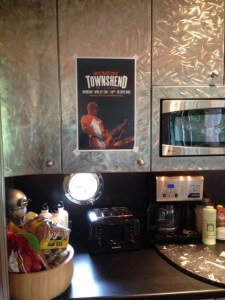 I’ll never forget the first time we met, he and Jerry Garcia were discussing songs from my debut album, Sweet Sound while I stood there with my jaw on the floor, speechless. Eddie leant forward and began singing into my ear the words to a favorite song from the album, Palace In The Air. Since then we’ve been good friends. We have a mutual respect for each others work. He, in my opinion, is the best artist that emerged from the nineties grunge scene out of Seattle. His voice is legendary and for me, the Into The Wild film soundtrack is some of his finest solo work. In May 2010 he joined The Who as special guest for the TCT Quadrophenia show at The Albert Hall, London, in September 2002 Pearl Jam played a double bill with us at the House of Blues, Chicago and in August 2009 I jumped up and played The Real Me with Pearl Jam at the Shepherds Bush Empire, London….. but we’ve have never had a chance to play any of my songs together which Ed has expressed an interest in doing over the years. There’s a strong chance this will happen when I perform at The Triple Door next Wednesday 23rd, amidst my US solo tour. I’m so psyched. It’s a dream come true for me and as Ed reminded me…. for him, too.